AD2: Walking In This World

My second1 artist date of the year was a glorious walk through Leigh Woods, helped to be even more glorious by the weather.

One of the joys of working from home, for me, is the ability to take a day off at the drop of a hat. Obviously this is a work-from-home superpower that should be used with great responsibility, but if the heavens dump a mass of snow on Bristol on a working day, I’m definitely taking the day off to go take photos.

So, on Friday morning I set off with my camera and my YakTrax grippy things on my walking shoes (I’ve had them for a few years now, and they’re really good in snow and ice) with not much idea in my mind where I’d end up.

After taking a few photos of the aftermath of several people slightly foolishly trying to drive down Granby Hill (well done to the person with snow chains on their tyres who actually made it, though!) I wandered around Clifton Village — stopping to grab a mocha from BTP — took a few snaps from Observatory Hill, and then headed across the Suspension Bridge to Leigh Woods.

Leigh Woods was amazing. It’s amazing in snow anyway, but this time I was among the first to get out there the morning after a big batch of snow arrived, which made it even better. Everything was white, even the normally-muddy tracks, and didn’t see as many as half a dozen people in the couple of hours I was up there.

It sounded great, too. I love it when I’ve been walking in snowy forest for a while, and then I just stop, and listen to the silence. Leigh Woods was extra-quiet, I guess partly because of the dampening effect of the snow, and partly because there was a lot less traffic on the A4 — the traffic noise from the Portway is normally the only man-made sound you can hear in Leigh Woods — and partly just because there were fewer people around than normal.

So. Yes. Beautiful, peaceful, natural and lovely. I could go on, but I’ve got a lot to do today, so I think I’ll stop here and let the photos tell the story… 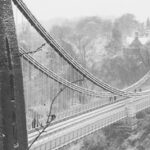 « Bristol and the Myth of the British High Street | AD3: From Forklifts to Ferraris »