I’ve been a busy bee these last few weeks. A little too busy, sadly, and I’ve been neglecting a few things, as you might have noticed from the dearth of posts on t’blog.

On the plus side, I’ve learned enough iPhone programming to submit my first iPhone app to the App Store. It’s a pretty trivial body weight converter, so I don’t know if it’ll get approved, but I think it works pretty nicely, and, more importantly, it fills a little niche: there aren’t many weight converters that handle stones well. (Even Google Search’s good built-in conversions don’t do stones justice. They claim 209 pounds in stone is 14.9286, where of course a human — at least a British or Irish one — would be expecting the answer “14 stone 13 pounds”.)

In the first one, I was just going to nip into town to head for a record store on Record Store Day. As things turned out, I basically had an extended, half-day, multi-trip artist date. I started off with a ferry ride into town, where I tripped over The Bristol Bike Show, filling Corn Street and its environs with motorbikes and mopeds.

Then — after bumping into my friend Paul and having a coffee at the always-lovely Sourdough Cafe, I walked up Park Street to head for Rise, but got distracted by Lucy Edwards’ installation Gross Domestic Product in the little gallery opposite College Green, not least because she was handing out free chocolate cake.

In the end, I made it to Rise and wandered around in the lovely Record Store Day atmosphere. I didn’t buy any vinyl — I think my LP days are over — but I did grab a copy of The Kniφe’s Shaking the Habitual.

That was mostly done in the spirit of buying new music I’d never heard of, though my choice was influenced by them being next to Bastille’s Bad Blood, for an exceptionally geeky reason. That album was styled “BΔSTILLE: BΔD BLOOD”. At least Kniφe’s Greek letter makes sense, damn it. Substituting Greek letters that just happen to look like an English letter just looks illiterate to me. (Yes, I’m a πedant. Sue me.) 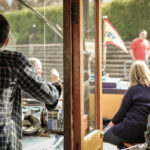 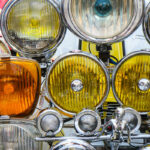 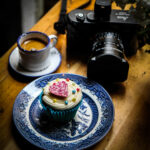 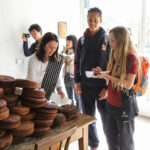 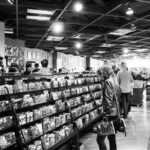 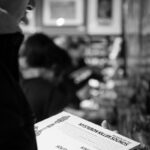 My second artist date was a lot shorter and simpler. I just went to take photos of the side of the Avon Gorge, like this one: It’s a view I’ve always enjoyed while I’ve been out jogging down the towpath, but never spent the time to go capture with a proper camera on a tripod. My artist date came in useful for digging up the motivation to make some time for that. I think I might go back when the sun’s somewhere slightly different — with it just on the top houses, I had problems getting the detail I wanted below without blowing out some highlights.

So. Yes. I’ve skipped a couple of artist dates, and my Project 52 isn’t exactly on track at the moment. Playing catchup may be tricky for a while, so I think I’m just going to go back to my one-a-week schedule to make sure I stick with the project, rather than feeling guilty about it. There may be time to play catchup later. A friend of a friend is about to have a 30th birthday party where she does thirty things she’d always wanted to do before she was thirty in the space of a single day…

« The Morning News: Paris and the Data Mind | What To Do When The Bus Doesn’t Come And You Want To Scream. An Experiment : Krulwich Wonders… : NPR »