Posted by Matt Gibson on Oct 9, 2016 in gadgets, Geekery, Reviews | No Comments

Gosh, but isn’t the Amazon Echo bloody brilliant? I mean! The speech recognition, the voice of Alexa herself (we’ve come a long way since I were a lad), the way it can pick your voice out from across a noisy room and home in on exactly what you’re saying…

What? You already know? What do you mean, you’ve had one for months? Oh.

Yes, as with many things, it’s harder to rave about the Echo if you’re British, because while they’ve only just arrived in the UK, those lucky Leftpondians have been enjoying them for ages.

I think it was worth waiting for. And I can see why you wouldn’t necessarily roll it out to every region at once. There are more international considerations than with, say, a book. You don’t just have to change the words so they’re spelled right. You’ve also got to find someone to be the British voice of Alexa (and they chose well; she sounds much better than Siri, to my ears.) You’ve got to tie into local weather services (and default to Celsius rather than Fahrenheit; we’re not cavemen, after all.) You’ve got to set up skills so Alexa hooks up with Just Eat and Jamie Oliver, not Dairy Queen and Denny’s…

And it all seems to have gone rather well. I’ve not tried the food delivery — have you seen what the local Indian place charges to bring you a biryani and a bottle of Kingfisher? — but I’m enjoying my Echo immensely.

From the moment I slid this black plastic monolith out of its box and hefted it onto my bureau, its weight whispering of the exotic magnets of high-quality loudspeaker drivers, the experience has been excellent. 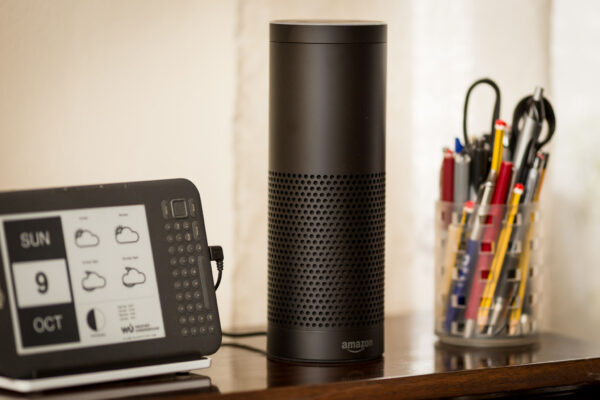 The Echo is very different from Amazon’s previous hardware offerings. The Kindle and the Fire TV Stick are clearly built to a fairly low budget; they’re good for the money, but they don’t shout “quality”. The Echo does. The Echo fills my large lounge with sound, the ring of pleasingly Star Trekish lights around its upper circumference glow and chatter when I start a sentence with “Alexa,” and…

And here’s the killer: She actually works. “She” being Alexa, the cloud of AI that’s sitting behind the Echo hardware. Unlike Siri, she does what she promises. The ring of microphones do pick your words out of the air across a busy room, spoken normally. She ties in with my music library, so I can say, “Alexa, play First Aid Kit” and charmingly odd Swedish country music fades in. She ties in with the Amazon music cloud, too, so I can say “Alexa, shuffle Lily Allen,” and it works, though I’ve never bought a Lily Allen album in my life. There’s virtually no lag, there’s no waiting for her to be ready to listen to you. You just say stuff, and she responds, and the vast majority of the time she responds sensibly.

And other, unexpected things work. “Alexa, how do you spell Lily Allen?” “Lily Allen is spelled L‑I-L‑Y A‑L-L-E‑N”, she intones.

On a whim, “Alexa, what are the planets of the Solar System?” “Our solar system has eight planets. In order of distance from the sun, they are Mercury, Venus…” She lists the lot, including a coda about poor Pluto.

I ask her to name the countries of Africa, wondering if she’ll mindlessly spout all 54 of them. She sensibly names a few of the larger ones, then refers me to the full list that she’s arranged to be displayed for me in the Alexa app on my phone.

Mostly, I ask her more sensible questions. “Alexa, will I need an umbrella today?” “No rain is expected in Bristol today.” Or give her more mundane commands, “Alexa, play me something from Prime.” “Here’s an Amazon Music Station you might like: The Civil Wars”. (I hadn’t heard of them. She was right: I did like them.)

I am probably not exercising her as much as I should. Perhaps I don’t want to risk disappointment. And some of the geekier things are still yet to arrive this side of the Atlantic. The Alexa IFTTT channel remains resolutely US-only, which must be driving their Twitter support team to distraction, as their timeline is basically just a wall of apologies and comments that Amazon and they are working on it right now, honest. Plus, the sleep timers and Jamie Oliver will have to wait until I have an Echo or at least a Dot in the bedroom and the kitchen.

And I’m saving my pennies for them already, because I’m excited about the Echo and Alexa in a way that I haven’t been about technology in some years. It’s been quite a long time since it felt like the Science Fiction future of my childhood had arrived in my house. The novelty of the intelligent hand terminal with access to the sum of human knowledge — which of course we’d call something more prosaic, like “phone” — has worn off, wonder though it is.

But now the science fiction of my youth, with its talking computers in homes and in starships, seems to be taking another step into reality. And it’s great. It’s just a shame that Peter Tuddenham and Majel Barrett aren’t around to add their voices to the phenomenon.

Douglas Rain is still alive, happily, but perhaps we’d best not go there…

Anyway. This is not one of my usual big reviews; the Echo has been out for long enough that there are plenty of reviews available around the internet. But people have been asking how the Echo and I are getting along, and this is my answer: pretty damn well, thank you. 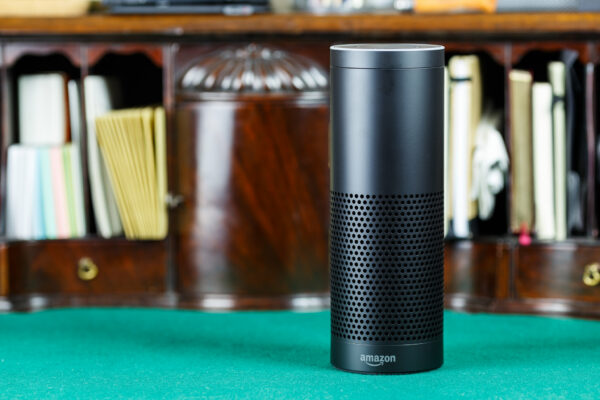