In my marathon Kindle 3 review, I bemoaned the price of the official Amazon Kindle case (£30 for the basic version!)

Also, though it’s great that I can put the Kindle down on a table and read it — it doesn’t fold itself shut like a paperback would — the slightly-glossier-than-paper screen means it’s more sensitive to viewing angles than a book if you want to avoid reflections. I kept wanting to have it propped up, rather than flat.

This style of name is a product of Amazon’s own fogginess about what to call their products and slightly desperate marketing SEO, I guess…

Despite the crazy name, here was a prop-up Kindle case for £16.49, around half the price of the official Amazon one. And with a car charger thrown in! I figured it was worth a try.

Here it is, straight out of the Jiffy bag from GADGETPLUSUK 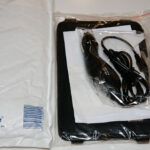 From the Jiffy Bag 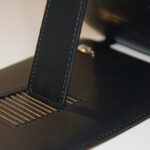 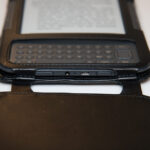 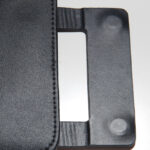 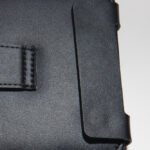 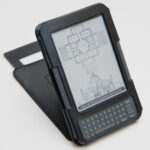 It’s a wrap-around case; you slide the Kindle into the central core, and when you want to read, you unfold the front cover forward, down and around to make a base for the stand at the back.

My verdict so far? It’s not bad. The quality is certainly acceptable — the leather doesn’t seem as high-end as Amazon’s official case, but it’s okay. The stitching looks well-done, and the Kindle slides into it like a glove, with the screen, keyboard, buttons and connectors all still easily-accessible when the case is open. The magnetic “catches” — the case closer and the flip-out prop for the stand both feature invisible magnetic fastening — are a nice touch.

The stand works well in practice. It looks okay, it’s got enough range of angle (not much, but enough), the Kindle feels secure when propped up, and everything’s nice and accessible.

There are two downsides I can see. First is that the “hinges” for the cover are just thin leather strips. This feels like the flimsiest bit of the case, and I’m a little concerned that these will turn out to be a weak point. I could be wrong.

Second, the case isn’t as good as the official case

when you don’t want to prop the Kindle up. It’s more fiddly and less book-like to open, and the cover wobbles about a bit when folded back. It feels less sturdy in your hand.

As for the car charger, I’ve not tried it yet, but it looks decent enough. Car lighter socket on one end, a good length of cable, micro-USB on the other end. Presumably there’s a pretty standard chipset now for “turn a roughly 12-volt supply into a USB power feed”, so I’m sure it’ll work just fine.

Conclusion: As my reading time’s split about 50:50 between prop-up and hold-in-my-hand, I’m still on the lookout for a stand that does both really well. And there are increasing numbers of interesting-looking Kindle 3 covers available

. But the Duragadget case

is a decent enough buy, and it will probably be my main case for now.

If you do more propped-up reading than hand-holding, and especially if the car charger would come in useful, I’d recommend this case for the price. If not, though, you might want to wait a month or so and see what else is out there. Hopefully more and more reviews will start springing up in the wake of the recent flood of new case designs, so you should be able to get more idea of what you’re buying.