The OS X user-level Library folder (/Users/<your short name>/Library, or ~/Library for short) is hidden by default in OS X, from Lion onwards. I’m going to show you several different ways to show and open your Library in Lion, in increasing order of geekiness and permanence.

Mavericks update: Yet another, easier, way to reveal your library has appeared in Mavericks. Thanks to The Sweet Setup for the tip: head for your home folder in the Finder (you can use the Go->Home menu option, or Shift-Command‑H), then View->Show View Options (Command‑J). On the info pane you’ll find a “Show Library Folder” tick box. I guess that Apple worked out that people did sometimes need to get to their Library folder1.

Caution: anything you do in your Library, you do at your own risk. Apple have hidden it for a reason in Lion, and I’m not going to be responsible for anything you break if you open it up and start fiddling with it.

If you’re in the Finder, hold down Option (Alt) and hit the “Go” menu in the menubar. As long as you’re holding down the Option key, the Library will appear in the list of locations in the drop-down. Select it and a Finder window will open up on your Library folder.

Once you’ve got a Finder window opened on the Library, you might want to keep it hanging around by dragging it to your Finder’s Favourites list in the sidebar. But if you can’t see the folder itself, only open a window on its contents, how do you do that?

Again, holding Option, you can also drag the titlebar folder icon straight onto the Finder toolbar. It’ll then appear in every new Finder window.

From a File Dialog

If you’re in a File Open/Save dialog, you can just type your way to your Library folder. This trick isn’t new to Lion. Just type a tilde (“~”) and you’ll be presented with a “Go to the folder” box. Carry on and type “~/Library”, hit enter, and you’re there. 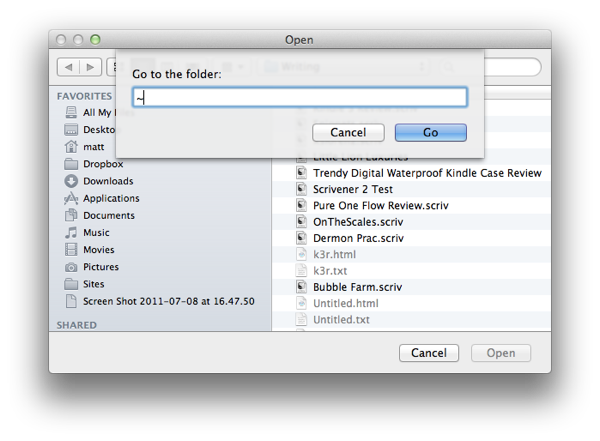 The Library isn’t hidden from the Terminal; you can see it and access it just like normal. It’s worth remembering, though, the OS X open command, which will open applications, files and — get this — Finder windows on folders. So, if you’re in the Terminal and want a Finder window on your Library, all you need to type is:

…hit return, and a Finder window will appear.

Reverting To A Non-Hidden Library

While still in the Terminal, try having a look at your Library, including the flags set on the directory, like this:

And there’s the secret: The Library has the “hidden” flag set.

To un-hide the Library, change the hidden flag with this command:

You may need to restart (at least the Finder) for this flag change to take effect. Also, I can’t guarantee that you won’t need to re-do that every time there’s an OS X version update…

That’s all the ways I can think of to access the Library in Lion, for now!