Musings on the Functional High Ground

Both my Macs are quite elderly right now. While they’re still powerful enough for most tasks I put them to, I’m starting to bump into issues just because of their age. For example, Intel don’t seem to be too bothered about supporting Core 2 Duo chips in HAXM any more, which is stopping my Android emulator from working.

Up until the last year or so, I’d have not considered replacing either machine with anything other than another Mac. But, as with Marco et al., I’ve started to wonder whether Apple’s current quality is good enough.

I got my first Mac in January 2006. At the time I was using Windows XP at work, and Linux at home. Look! I liked it so much I even drew it, using the late-lamented FreeVerse LineForm1: 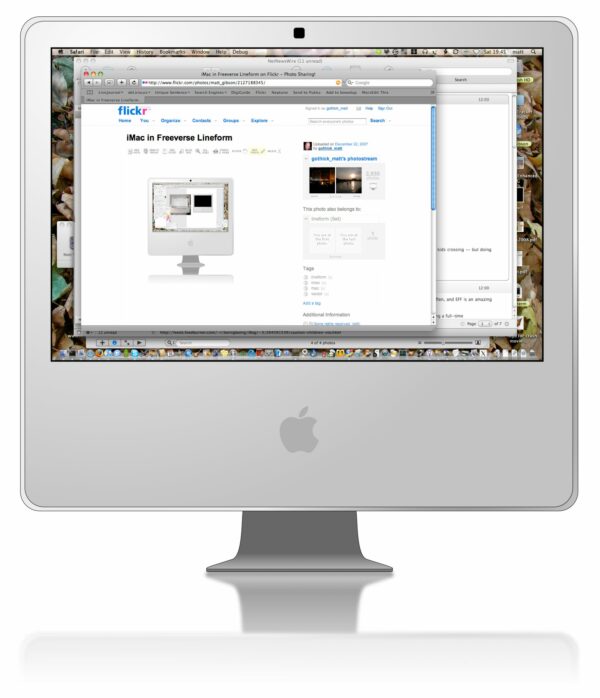 I’d been getting frustrated with Linux because I’d been trying to do more with photography and music, and Linux, frankly, sucked. I have blurry, nightmare-tinted memories of editing C code and recompiling kernel modules just to make it so that moving my Wacom tablet’s pen to the right didn’t move the pointer to the left. And multitrack audio recording? I could barely get my sound card working.

I’d given up on Windows at home years before, and my ongoing experience at the office told me it hadn’t improved that much.

Then, one weekend, I was in Clovelly, in Devon, for a celebration with many old friends. I remember sitting one morning, possibly slightly hungover, on a sofa in the lobby of the New Inn hotel, with my friend Benjohn.

Benjohn showed me his iBook. And showed me that there was a Third Way. The two things I particularly remember were Garageband, which he demonstrated with the “musical typing” keyboard and some general mucking around, and the fact that you could then — on the same machine that looked so good for multimedia — drop straight to a bash shell in a terminal window and fire up Emacs.

And all of this stuff just came with the machine. You didn’t have to recompile your kernel to get the sound working. Web video actually played. You didn’t have to install Cygwin to get a useful command line interface. It was, basically, a Unix box with a really pretty windowing environment where multimedia stuff worked. Plus, of course, for my burgeoning photography, Macs have always had a great reputation for graphics work.

Here’s a picture from Clovelly harbour, by the way, just down the hill from my meeting with Benjohn and his iBook, and edited on the Mac that meeting convinced me to buy: 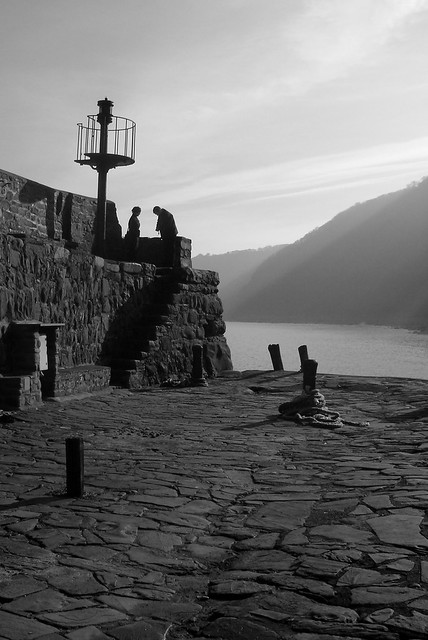 My 2006 iMac — one of the first generation of Intel Macs — was joined almost exactly a year later by one of the first white polycarbonate MacBooks. Since then I’ve replaced each one once, respectively with a 2009 iMac and an 11″ MacBook Air. When you’re regularly carrying a DSLR with a big lens it’s nice to have a laptop that you barely notice in your bag.

And I’ve had so many annoying problems with my Macs in the last twelve months that I’m not sure whether Apple is the way to go.

My iMac, for example. It freezes. A few times a week, I’ll be working away in some random task, and my entire screen will freeze. The mouse pointer will still move around, but that’s it. The rest of the desktop? Irretrievably dead. And I mean that — I know what I’m doing and I’ve had plenty of opportunities to try unfreezing it. Even ssh-ing into the machine, becoming root and rebooting the bugger doesn’t work. It gets halfway through the reboot process and then even that freezes. WindowServer won’t die, no matter what I do.

The only thing I’ve found that works is a hard, hold-the-button-down, power off. This is annoying, especially when you’re on the last page of the complex ticket-buying process on an airline website. Yes, that happened. 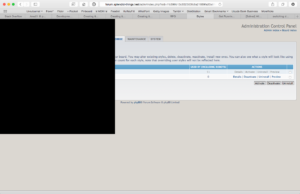 Also: while I’ve been reassured recently that the black rectangles I’ve been getting regularly in Safari instead of the actual web pages I want to read aren’t limited to just me, I’d still prefer not to have them. I could switch to another browser, but I like Safari. When it works.

And that’s the problem, in a nutshell. I like my Macs, when they work. But they’re working less consistently than they used to.

Now, there’s no such thing as the perfect operating system, or the perfect computer hardware. It’s a bit like phone companies: they all suck, you just pick the one that’s made you want to throw something through a window least recently.

I’ve always had plenty of little niggles. Don’t mention iDisk to me unless you actually want to see me throw something through a window, even now. But at least DropBox came along and provided an alternative that actually worked.

And I was pretty sure, at least, that there was nothing better out there.

I still like a lot of stuff that Macs do. And I still like a lot of the way they do it. But I look at the £2,000+ price tag for replacing my current iMac with a Retina iMac, and I wonder whether it’ll refresh my joy of Mac ownership, or whether I’ll just be looking at really crisp black rectangles in Safari, or taking time to admire the colour depth of a retina display as it irrevocably freezes in the middle of something important.

And the competition has had nearly a decade to get its act together.

Windows is a great deal better these days. And a lot prettier. And it can run Lightroom, and it makes a decent development environment.

Sadly, though, it still doesn’t really seem to suit me. I fired up Windows 8 in a virtual machine a couple of months ago, and I had to do a Google search to find out how to shut the bloody thing back down. Yup: a degree in computer science, and I couldn’t even find the “off” switch. And the Windows command line, while significantly less sucky than the DOS days, still just isn’t my cup of tea. (I’m sorry, PowerShell, but I’m a unix geek at heart.)

Linux almost certainly still sucks for multimedia things, and it can’t run Lightroom, my tool of choice. But it would be a fine development platform.

So maybe some kind of hybrid solution is what I need. My friend Steve develops in Linux but boots his PC into Windows to use Lightroom. It’s not ideal, but then OS X’s regular lock-ups and Safari’s black rectangles aren’t ideal, either.

I’d probably be paying out about as much money as for a retina iMac if I bought a decent spec machine with a good 4K monitor and replaced all the software I need. Some of that’s got easier, too — I think my existing Creative Cloud subscription would let me install Lightroom and Photoshop on a new Windows machine instead of this Mac without paying extra. And, hey, at least if I wanted to upgrade the drive to an SSD, I could just shove it in myself, rather than paying an Apple Authorised Repair Centre £60 an hour to do it for me…

So, here I sit. Typing into a WordPress window and wondering if I’ve saved recently, because this Mac might freeze at any moment. And ponder…

It’s a big decision, and I’m not going to rush it. But perhaps my Apple love affair is coming to an end.